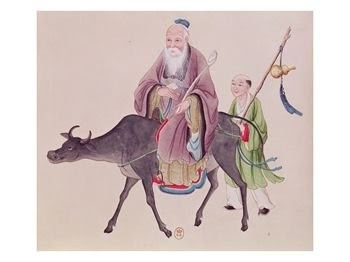 I Simply Love this Story and this Book.

Please let each word resonating into yourself. Do not read this as a book, because it’s not. Every word is a deep frequency trying to reach your inner string and vibrating together. Try it and if this does not happen try again and again. Keep reading the same chapter for a week or a month or more, everyday and dive into it. It’s not so important how fast you finish reading it, because each page is trying to tell you exactly the same thing, just changing prospectives and words.

“Those who know do not speak, those who speak, do not know”

The Tao Te Ching (also called “The Tao”, “The Dao” or the “Dao De Jing”), by Lao Tzu, is one of the most influential and translated books in history. Many Chinese artists have used the Daodejing as a source of inspiration.

There are numerous legends about Lao Tzu (570-490 BC).  Many believe he never existed at all, while others indicate several possible historical identities for him. Anyway they all place him in Luoyang  the ancient capital of China.

According to Chinese tradition, he lived in the 6th century BCE, while in Greece was Plato and Socrates, in India was the Buddha and in China was Confucius.

According to popular traditional biographies, he worked as the Keeper of the Archives for the royal court of  Zhou in Luoyang.

This allowed him to study the archive’s books avidly.

Lao Tzu never opened a formal school, but he  attracted a large number of students and loyal disciples. There are numerous variations of a story depicting Confucius consulting Lao Tzu. It seems that hearing of Lao Tzu’s wisdom, Confucius travelled to meet him.

Birds can fly, Fish can swim, Animals can run, So they can all be snared or trapped.

But Lao Tzu is like a flying Dragon, un-trappable.

Much later, Lao Tzu grew weary of the moral decay of city life and perceived that the kingdom’s affairs were disintegrating , so he decided was time for him to leave.

He ventured west to live as a hermit and while traveling on a buffalo he came to the Han Gu Pass.  The sentry of the pass realized Lao Tzu was leaving permanently so he asked the old master to write out some of his wisdom before proceeding further, so that it could be preserved once he was gone.

So he  wrote the Tao Te Ching and then left and no more was heard.

The tao that can be told

is not the eternal Tao

The name that can be named

is not the eternal Name.

The unnamable is the eternally real.

Naming is the origin

of all particular things.

Free from desire, you realize the mystery.

Caught in desire, you see only the manifestations.

Yet mystery and manifestations

arise from the same source.

This source is called darkness.

The gateway to all understanding.

When people see some things as beautiful,

When people see some things as good,

Being and non-being create each other.

Difficult and easy support each other.

Long and short define each other.

High and low depend on each other.

acts without doing anything

and teaches without saying anything.

Things arise and she lets them come;

things disappear and she lets them go.

She has but doesn’t possess,

When her work is done, she forgets it.

That is why it lasts forever.

Chapter  81 and last one

men who need to prove their point aren’t wise.

The Master has no possessions.

The more he does for others,

the happier he is.

The more he gives to others,

the wealthier he is.

The Tao nourishes by not forcing.

By not dominating, the Master leads.

You can find the Stephen Mitchell’s translation here:

Iggy – What is Reiki